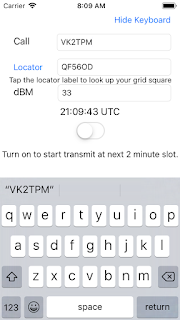 The crash was interesting, it wasn't clear what was crashing, somewhere deep in framework c++ code. In the end it turned out that my table of band frequency edges hadn't got 60m correct for all parts of the world and if I got a frequency I didn't expect I'd try to set the colour of an attributed string to an illegal colour. It didn't crash right away though. Thanks to those who reported the issue.
Posted by Peter Marks at 7:31 AM