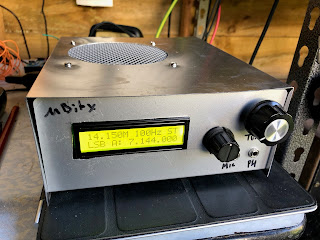 Inspired by the latest edition of the Soldersmoke podcast, I took a look at the updated software that has been created for the embedded Arduino Nano.

My uBitx is looking much nicer since I made a new lid for it and mounted the speaker with a grill made of offcuts from the gutter guard we had installed last year.

I used the latest version of the Arduino IDE 1.8.5. Next I went to library manager and updated all updatable libraries and the same for boards. From the downloaded software from GitHub I opened the ubitx_20.ino file and did a build (the tick button). All built smoothly for me.

The Raduino board (sandwiched with the display) was removed from the uBitx, mainly because the position of my volume control blocks the mini USB port. I removed the display and plugged the board in to USB.

When I programmed it gave timeout errors saying that the board wasn't responding. I tried a different computer and different cables. Finally I tried the "old bootloader" option and all was good.

Along the way I first tried under Linux and then on macOS. The serial driver I needed was found via Bjorn's Techblog.

Now the uBitx is much nicer to tune and there are lots of interesting menu items to explore.

Some of the features are:

Great work by KD8CEC and others on all this and of course credit to Ashar Farhan for creating the uBitx and making it all available for hacking.

Encouraged by the improved tuning action, Stephen and I had our regular 20m sked with uBitx rigs on both ends. Stephen could hear me over the local noise and I could hear him pretty well when he "talked it up". Both of us have been reading the ubitx site and have independently ordered a low cost mic amplifier/compressor board.

I'm now keen to re-box my uBitx to give more room for the tuning knob. I'm looking for a knob with a finger indent that will screw on to a 6mm shaft. They are about but seem very expensive generally as an after market add on for a commercial rig.

We're also interested in digital modes on the uBitx and of course the best way to do this would be to build in a USB audio interface with VOX. Not sure that I'll go that far but worth thinking about.
Posted by Peter Marks at 2:06 PM