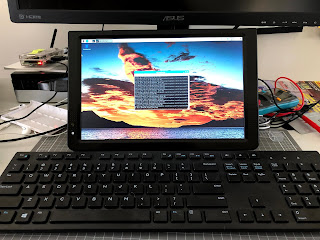 The Leadstar 12V TV I bought for the van has HDMI input and it's an obvious possible display for a Raspberry Pi.

The screen's native resolution is 1280x800 but by default the Raspberry Pi doesn't offer this resolution in the GUI configuration software.

By default the Pi outputs 1080 lines which is readable on this screen but a little fuzzy.

To get the Pi to output the native resolution I edited /boot/config.txt as follows:

This now boots up in 1280x800 at 60Hz and works nicely. As mentioned in a previous post this TV cost $130 on eBay and seems decent. It runs on 12V and has an internal re-chargeable battery. The built-in software doesn't know about the Australian band plan. The seller sent me a RAR archive with new software but for some reason it doesn't like it and won't update.

Anyhow, this is a good screen for a small Raspberry Pi setup.