Since eliminating the annoying interference I was suffering, I've returned to the pleasure of tuning around on HF. A while back I bought the US$150 SDRPlay receiver. Getting it going with some of the common software is a bit of a trial due to the proprietary driver that's needed.

SDR Console is a very nice SDR receiver program that works out of the box with SDR Play. (Be careful on their site, they accept ads that portray themselves as bogus "download" buttons).

SDRPlay is more expensive than the RTL-SDR TV dongles but it's really worth it. They have a 12 bit A/D and capture a much larger part of the spectrum so it's easier to see the whole band and find stations. 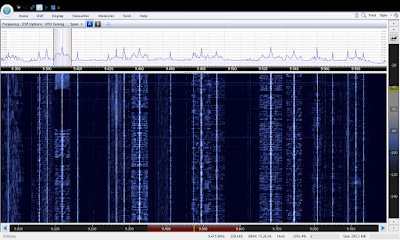 And here's 40m LSB on an active Saturday afternoon. 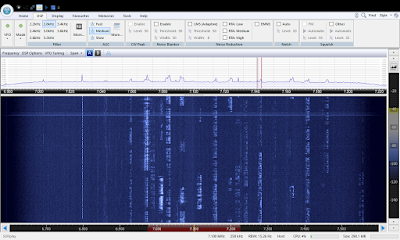 A tiny snippet of video shows how it looks when running.


I'm running this on a Lenovo ThinkPad X201 with Windows 10. It's a Core i5 processor at 2.4GHz with 4GB of RAM. The software reports only about 4% CPU so there's plenty of headroom. You would struggle to run this on a cheap netbook.

One tip - there are keyboard commands for moving the IF and tuning up and down but they're disabled by default. There's a setting and then you can use PageUp and PageDown to move IF and arrow up and down to tune. Fine tuning is by holding the Control key.
Posted by Peter Marks at 6:33 AM