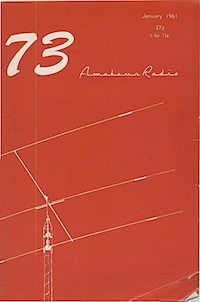 Stephen, VK2BLQ, sent around an email pointing to a great archive of scanned issues of a popular ham radio magazine from my childhood, "73 Amateur Radio".

They come up in a rather strange order, like all the Decembers together, but they are high resolution scans saved as PDFs so perfect for reading on an iPad for inspiration.

Early editions are valve technology, later there are hybrid rigs with solid state drive to a valve final. Gradually digital frequency displays creep in and there's a marvellous time when having an LED is a feature worth advertising.

This collection, for me, represents what may be a golden age, before everything in electronics just turns into computer chips surrounded by surface mount components.

A few of the home brew group seemed interested in grabbing the set for later viewing so I wrote a little python script to download them from archive.org to share around. (I think I'm being throttled but it's going pretty well).

If you stop the script and re-start it, it will not re-download any that it has. Otherwise it's pretty basic stuff.

Thanks archive.org! Look out for the ladies with tech: