I've loved the iPhone 3GS and was ready to pick up an iPhone 4 but I currently have a bad feeling about them and given that my life is stored in Google's cloud I thought it was time to try an Android device.

This story is for anyone who is used to the iPhone and thinking of jumping to the Android camp. 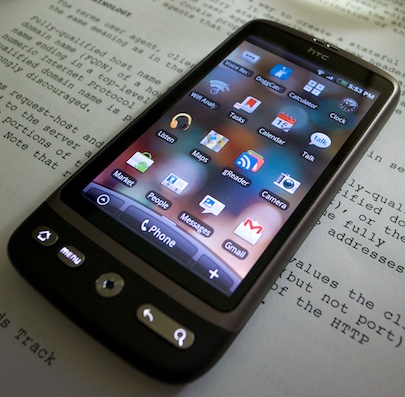 Compared to a 3GS, the hardware is mostly better. The screen is higher resolution, it feels lighter, and it's actually faster to use than the iPhone (which after the iOS 4 upgrade has got a little slower in some places). But this story isn't a hardware review.

If you use Google mail, calendar, and contacts then the way the new phone is set up and all syncs nicely is fantastic. Push email comes through in a few seconds. You can have more than one Google account syncing (but oddly only the primary one syncs calendars).

It's nice having the phone synced to the cloud and not needing silly old iTunes to activate it.

The home screens can be customised in many ways and the background image slides a little between pages. Widgets, little apps that run right on the page, are great and I can't understand why Apple has hesitated with these.

While finger scrolling isn't quite as smooth as on the iPhone - Apple really has this figured out, it's fine.

Notifications, up the top of the screen as little icons, are much better than on iOS.

The device mounts as a disk drive over USB and supports bluetooth push and even FTP!

Having an upgradable storage card (2GB bundled) is nice but the iPhone was so big it never bothered me.

The openness of the Apps marketplace means that there's all sorts of technical apps for a propeller-head like me. Things that show where satellites are, things that graph the channels of WiFi hotspots, and so on.

The camera is better than the 3GS but it sounds like that's been fixed in 4.

It's great that the charger socket is USB but what a pity that it's micro rather than the common mini socket.

The headphone is 3.5mm but, what a tragedy that phone makers haven't standardised on microphone and inline button connections.

Google has some great apps to amuse your friends like the language translator that you speak to and then have it speak back in the other language and the Maps application does street view but as you turn the phone it pans the map.

Music player is nowhere near as good as the iPod functionality, fast forwarding is hard.

There's no built-in support for podcasts although a few apps, such as DoggCatcher seem to offer podcast subscriptions and downloads, the directory is limited and the functionality clunky by comparison with iTunes/iPhone.

I know it's probably hardware but the touch calibration of the screen is not accurate. Yes I've re-calibrated but it only did the keyboard and I find the close button up the top is out by quite a few pixels.

Typing on the keyboard is not as good as on the iPhone but I do like the "hold to popup numbers" entry method and the vibrate on key press is almost haptic.

The speaker is really tinny and while I would consider listening to voice on the iPhone while pottering about, it's just horrible on the Desire. (Headphone audio is good though).

The bundled earphone/microphone is uncomfortable and tinny like the speaker.

Battery life seems about half of the iPhone 3GS so far. Hard to tell as I'm using it a bit more, but now I'm definitely in the red by the end of the day and probably need to get a charger for work. Update: Battery life has now improved. Not sure if it just needs a few discharge/recharge cycles to get going or if the new firmware (below) has improved it. No complaint now.

Why do the telco's think that we'll think warmly of them if our phones are covered in their products? Telstra has gone mad and really cluttered up the phone with links to their brands. 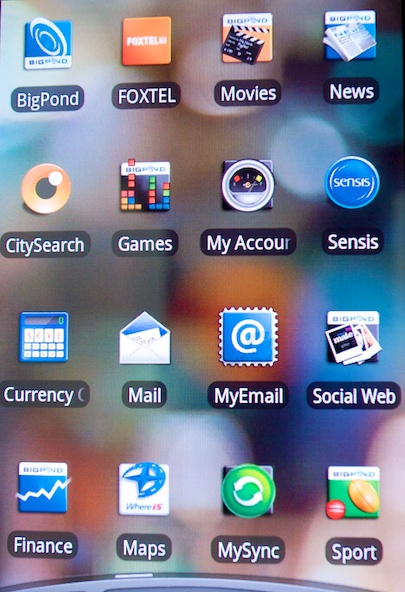 And that's not all, there's also: Bigpond Travel, Bigpond TV, Bigpond Weather, White Pages, and Yellow Pages! A simple Google search does a better job than most of these.

First, all of these just clutter up the phone. Second, most of them don't work if you are on your WiFi network - they must connect via WAP and you just get a connection error when you try them. Finally, some of them, like MySync popup and tell you that this device isn't supported, so why install it?

Why duplicate Weather and Maps when the built-in apps are excellent, it just makes Telstra look amateurish. Annoyingly, these are all in firmware and can't be deleted.

By all accounts the next firmware upgrade to 2.2 will make it better and faster and I'm looking forward to that in Q3. It's only been a few days and I'm still finding the Apps I want to live with. So far I've installed or purchased: gReader (Google Reader), Barcode Scanner, doubleTwist Player (and the Mac client), Text-To-Speech Extended, Google Translate, Compass, Google Earth, Wifi Analyzer, DoggCatcher Podcast Player, Grid Locator, Android System Info, WiFinder, Google Maps, Google Maps Navigator, Twitter, GPS Test, Dropbox, and Listen.

Android Market works well and purchasing is easy with your Google checkout.

I'm looking for replacements for: OmniFocus, Skype, TouchPad, Instapaper and most of all TripView Sydney.

In a sense, having an iPad frees me to try a different phone while still keeping a foot in the portable Apple camp.

Watch out for background data use! Yesterday I got an SMS from Telstra to say that I've burned through 80% of my 200MB monthly data. I think the combination of background apps and software such as DoggCatcher that downloads podcasts has caught me out.

Chatting with another Android user, Ross, I find that he turns off data access unless he specifically requests it. There are settings to stop background access to data and DoggCatcher has specific settings such as only sync when on Wifi for when plugged in.

I "rooted" the phone painlessly using unrevoked. You need to turn on debug over USB but then it's as simple as running the program and plugging in the phone.

One benefit of this is that I can run software that lets me use the phone as a Wifi hotspot (a feature of Android 2.2 anyhow when that comes) using android-wifi-tether.

Pity I'm almost out of data..

It doesn't let me get rid of all the Telstra crap though.

Getting rid of carrier crap

I'm now running Android 2.2 "froyo" on my HTC Desire. It's perfectly usable but there are a few bugs. Basic functionality is all there and the best bit is that it's free from all the rubbish Telstra had put on there.

Here's the trick: Install "ROM Manager Premium" from the store, US$3.99. Through that I backed up my current ROM to the storage card, flashed the ClockworkMod Recovery software, downloaded OpenDesire-2.3 and flashed it.

Along the way I found the memory had to be cleared, or it just looped while booting. No great loss though as all my contacts and calendars are easily synced again from Google. Apps I'd purchased are remembered by the store and can be re-downloaded without any trouble.

At this point I'm very happy with this phone and having fun. It's a bit of a worry flashing firmware and you run the risk of bricking the phone but for me it all worked out and I'm sure I'll continue to play in this area.

I'm still hunting for a good way to load up podcasts. DoubleTwist looks promising but the podcast part isn't done yet. Right now I'm trying Missing Sync for Android, here's one message I got:

I'll have to order a larger MicroSD card.