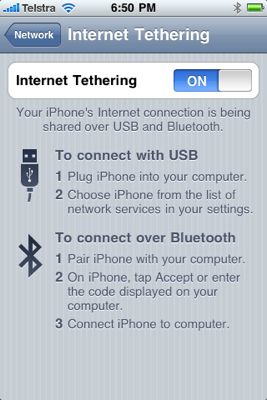 Can't believe I've lived without this until now.

I'm on Telstra and just as an experiment took the iPhone browser here and clicked the APN link for telstra.iph (which for me mistakenly reported it would use telstra.internet).

Went to Settings, General, Network and there is was.

Unplugged my desktop computer's ethernet cable, plugged the iPhone in via USB and a new network alert was shown.

On the Mac, all was smooth sailing. 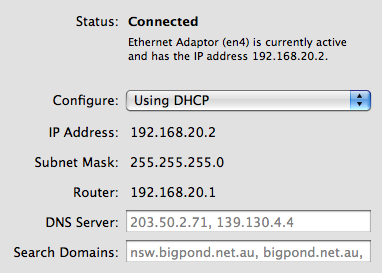 This is a fantastic feature and I can understand the carriers wanting to charge extra for it but how can they justify it? We pay for the data on the phone anyhow but for some reason they feel that if we use that data in one way we pay more than if we use it in another way. What possible justification can there be?

I'm not alone in this view.

Carriers - don't try to limit this! You'll make more money and be able to upgrade your networks if you step up and just meet this pent up demand.

Early indications are that if Apple really wants to block this re-configuration they are going to have to work very hard in the hacking arms race.

Having tried it, and thought about the use, a phone that tethers is infinitely superior to one that doesn't.

Great stuff Apple, I hope that all phones will follow suit.

You can load settings with tether enabled for many carriers around the world, including Telstra here. You open this page on your phone by the way.
Peter Marks at 2:30 AM
Share